Book Review: The Path of The Law 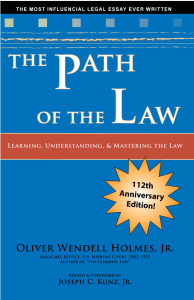 Introduction
The thoughtful reader of The Path of the Law will enjoy the sensation of having at his side a guide, philosopher, and teacher who carefully guides him to learning, understanding, and mastering the law.  To read and reread this book is to experience taking on from a great teacher some of the things he has learned and to become excited about the subject too.

The Path of the Law presents the conclusions drawn by Holmes after more than 30 years of legal observation, thought, and practice of law.  He probably wrote this essay to further discuss what he began in his most famous publication, The Common Law. The Path of The Law was written not as a manual about the practice of law, but a manual to show students how to think like a lawyer; what it means to be a good lawyer; and what it means to have a successful law career.

What Is This Book About?
Obviously, many changes and improvements have taken place in the legal profession and in legal education since Holmes wrote this essay in 1897. But in this book Holmes is not concerned with the practical minute details of learning about the law: “Theory is my subject, not practical details.

Who Was Holmes?
Holmes was in a position to speak about American law with great authority. After graduating from Harvard with his law degree, he taught law there. He then served for 20 years on the Supreme Judicial Court of Massachusetts. Then he was appointed to the U.S. Supreme Court as an Associate Justice, where he served for 30 years.

Despite his fancy titles and very extensive experience, Holmes never talks down to the reader of this book. Holmes’ obvious love of the law and his desire to help others understand this attraction comes through to the reader loud and clear. Holmes uses many easy-to-understand examples throughout the essay to make his point.

The “Bad Man Theory” and “Morality Vs. Law”
The quality and simplicity of Holmes’ writing is reason enough to attract readers – especially law students. His illustrations are obviously chosen from wide experiences and are like vivid pictures flashed on a miniature screen.

Everyone’s favorite illustration is usually Holmes’ explanation of his “bad man theory”. Holmes explains “that a bad man has as much reason as a good one for wishing to avoid an encounter with the public force, and therefore you can see the practical importance of the distinction between morality and law”.

In other words, a bad man will want to know only what the material consequences of his conduct will be; he will not be motivated by morality or conscience. This example sets the stage for most of the book. Holmes puts a lot of effort into giving examples of the differences between morality and law.

It is a part of the rational study, because it is the first step toward an enlightened skepticism, that is, toward a deliberate reconsideration of the worth of those rules.”

Isn’t This Book Outdated?
The hasty reader might assume that this book was written too long ago to be of any practical use to a modern law student or lawyer. But a careful reader will immediately realize that Holmes has much to offer us today.  Holmes sums up his entire book in two short paragraphs:

“I take it for granted that no hearer of mine will misinterpret what I have to say as the language of cynicism. The law is the witness and external deposit of our moral life. Its history is the history of the moral development of the race. The practice of it, in spite of popular jests, tends to make good citizens and good men.

When I emphasize the difference between law and morals I do so with reference to a single end, that of learning and understanding the law. For that purpose you must definitely master its specific marks, and it is for that I ask you for the moment to imagine yourselves indifferent to other and greater things.”

“If a man goes into law it pays to be a master of it, and to be a master of it means to look straight through all the dramatic incidents and to discern the true basis for prophecy. Therefore, it is well to have an accurate notion of what you mean by law, by a right, by a duty, by malice, intent, and negligence, by ownership, by possession, and so forth.”

Conclusion
Those of you reading this book before entering law school should make an effort to re-read it several times during your law school studies. It is then that you will begin to understand more of The Path of the Law each time you read it, and really begin to understand what Holmes was trying to tell us – at a deeper level – and enjoy his message even more.

I help make it easier for anyone with a passion for a subject – and a desire to help others by sharing their experience and knowledge – to self-publish nonfiction books that will help them build authority and credibility, establish them as thought leaders, and help them make more money. Kunz is a husband, father of twins, and the co-founder of Dickson Keanaghan, LLC, a medical training and publishing company near New York City.
View all posts by Joseph C. Kunz, Jr. →
This entry was posted in Book Reviews, Law and tagged Book Reviews, Law. Bookmark the permalink.
error: Content is protected.